Kreuzberg, where I’m living at the moment, is heavily Turkish, Kurdish and student, and as such the big question about how the election will go here is what the relative order of the left-wing parties will be—the CDU, the centre-right party that’ll probably be running the country in a few months, is barely campaigning.

So, the posters are huge, and many of them are for the SPD, a ruling centre-left party. Here’s one that originally referred to Schröder’s opposition to the Iraq war, but that juvenile ingenuity has made more down-to-earth: 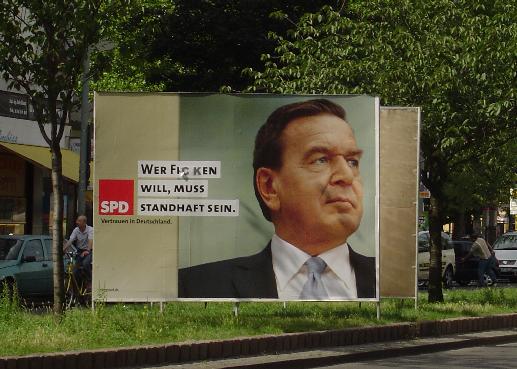 [“Those who want to fuсk, must be steadfast.”]

On another, unrelated note—I watched “Enemy at the Gates” last night. (German title: “Duell: Enemy at the Gates,” a terrible name for a film that doesn’t involve any English-speakers.) This was, as you would expect, very depressing, what with the Red Army—who won, remember—being even less humane than the Nazis. And then today a documentary on Mao’s China. Now considering these three régimes in succession, and considering that one of them running the world was, historically the only alternative to the current hegemony of the US: we got off lightly, folks. Bush may be an incompetent liar, but he is not remotely close to Stalin, Mao or Hitler.

(Yeah, perhaps not that original a thing to say, but I have a tendency to give Americans ѕhіt about their current régime online, and this is mostly a reminder to myself to temper that.)

For the German-speakers among my readers; this is from William Caxton, quoted in Otto Jespersen, Growth and structure of the English language  (which is, by the by, heavily leavened by some of the craziest sexism I’ve seen, but is still an excellent book for all that):

“And certaynly our langage now used varyeth ferre from that whiche was used and spoken when I was borne. For we englysshe men ben borne under the domynacyon of the mone, whiche is never stedfaste, but ever waverynge, wexynge one season, and waneth and dyscreaseth another season. And that comyn englysshe that is spoken in one shyre varyeth from a nother. In so moche that in my dayes happened that certayn marchauntes were in a shippe in tamyse, for to have sayled over the see into zelande. And for lacke of wynde, thei taryed atte forlond, and wente to lande for to refreshe them. And one of theym named sheffelde, a mercer, cam in-to an hows and axed for mete; and specyally he axyd after eggys. And the goode wyf answerde, that she coude speke no frenshe. And the marchaunt was angry, for he also coude speke no frenshe, but would have hadde egges, and he understode hym not. And thenne at laste a nother sayd that he wolde have eyren. Then the good wyf sayd that she understod hym wel. Loo, what sholde a man in thyse dayes now wryte, egges or eyren. Certaynly it is harde to playse every man, by case of dyversite and chaunge of langage.”