Jon Stewart is an American comedian who hosts something called “The Daily Show,” a satire of US news TV programmes. Just a paragraph from their recent episode dealing with weblogs;

“Chances are five years ago, if you’d heard the word ‘blogger,’ you’d have assumed it was some sort of derivation or truncation referring to one who maintains a weblog. And you’d have been right. Well done! hypothetical you.”

watch it all if you can. It’s entirely too funny.

Food is cheaper and better here. Had I documentary instincts worth the name, and had the food not been really, really, good, this would be a picture of what I ate for dinner yesterday evening—pasta, pesto, Mozzarella, Feta, with smoked salmon and some grated random other cheese—but instead it’s a picture of my empty plate, the excellent wine I drank with dinner (4.99, from Sicily), and some general kitchen background; 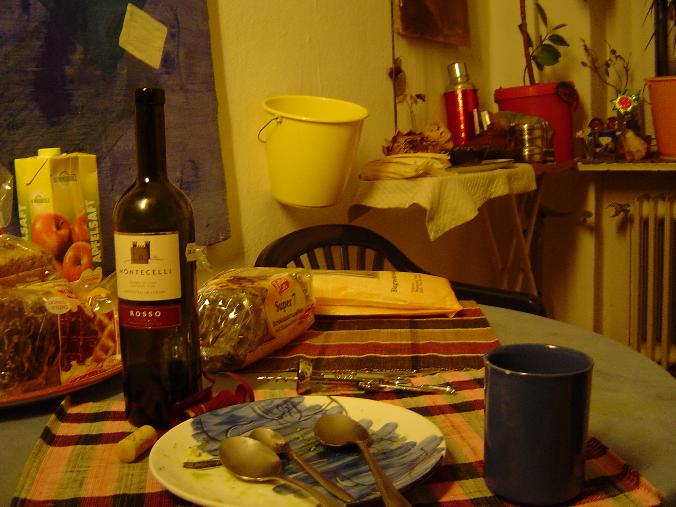 Here’s my flatmate’s cafétière, with my coffee boiling in it; 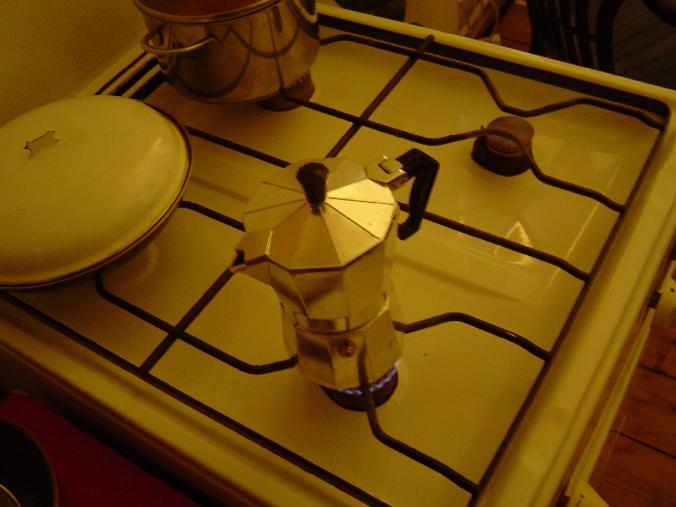 And here’s the view from the window of my hostel on the first morning I woke up—it’s a parody of good architecture, but at least you can see the snow: 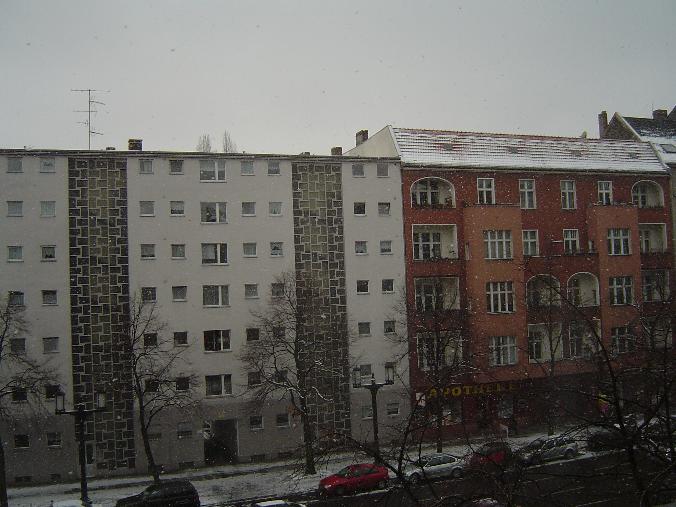 Okay, so Berlin so far is unreservedly fantastic. I spent the first week or so looking for an apartment, reading Karl Popper in Zoo Station, drinking with expats, cashing in on all the positive marketing of Ireland from Heinrich Böll and Louis Walsh [Umm. Interpret that how you will], saying to myself that I would apply to more jobs, beyond the one that had offered me an interview Thursday, once I had a permanent place to stay with free internet.

So, I moved into a room in an apartment here on Tuesday evening. I got the LAN set up in the apartment Wednesday morning, after buying a switch and lots of ethernet cable, spent Wednesday afternoon getting my flatmate’s wireless LAN working, spent Thursday morning catching up on email, went to the interview on Thursday afternoon, did a great interview, asked for much more money that I was getting in Dublin, and was offered it without a murmur. From Monday I’ll be working in a huge hosting company, administering and automating the administration of, shared and dedicated servers running sundry Linuxes. Apparently agreeing salary and a starting day of Monday is a noncommittal way to end an interview in Germany. Lesson learned. (Okay, to be fair, they did say “we’ll call you within two weeks,” but they said it in German, they were aware that my German was ѕhіt, and the rest of the interview had been conducted in English.)

The company’s a twenty minute walk from where I’m living, and seems dead cool, from the two people I met—one a huge, unshaven, German, stereotypical nerd, the other a comfortably multilingual French mec , who was well enough informed on the tech stuff that it wasn’t obvious that the other guy was there for the tech stuff.

So, yeah. I’m living in a bigger, more international city, getting paid more, having less to pay to survive every day, paying less for DSL, and, to be honest, I don’t anticipate having much trouble making friends—indeed, I haven’t had so far, even with catching up with people from the German conversation exchange in Dublin.