My friend Inma, who you probably don’t know, but who is charming and good-looking and all-round fantastic, went to visit someone she knows in in southern Germany last weekend, doing tourist stuff in Bavaria and spending an afternoon lazing around at an Austrian lake. She sent me a postcard from there—and I was a little weirded out initially, because it was in an envelope, which kind of misses the point of postcards—and with it, a square of German toilet paper. Which see: 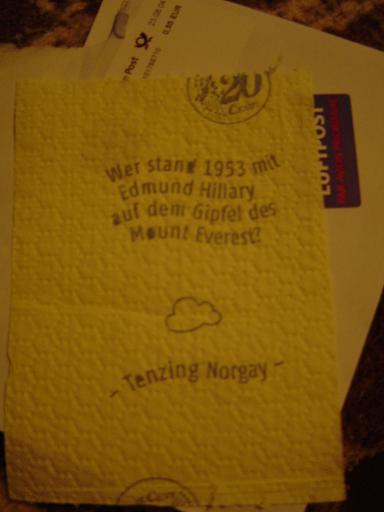 Yes, you are not hallucinating, that is a square of educational, pop-triva toilet paper that’s asking you who was with Edmund Hillary at the top of Everest. How cool is that? And how likely are you to forget that „der Gipfel“ means “the summit” now? I know I’m not.