“Operation Dumbo Drop” was on TV this evening. Setting a Disney feel-good movie with the American Army in Vietnam seems to me about a good a judgement call as would be setting one with the Wehrmacht on the Eastern Front; that is, not at all.

Tesco sell el-Cheapo ground coffee for people with machines, the sort of gits like myself that Just Ain’t Satisfied with instant and are still miserly; 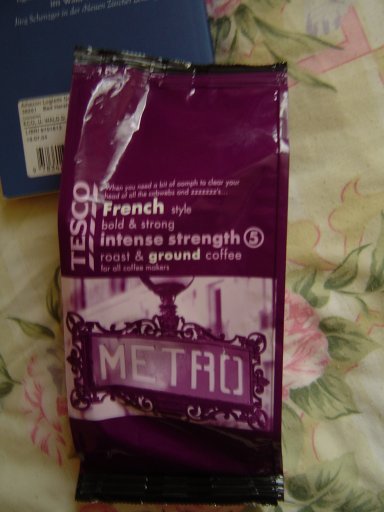 Now here’s the twist. Have a look at the side;

That’s right, they’re selling it in half-pound quantities. Which raises the question, who exactly do they think they’re aiming at with this product? People who drink ground coffee in Britain and Ireland—unless, perhaps, they’re American, in which case they will still confused by the lack of Imperial measurements—are, to generalise, not  anti-Metric luddites.

And it can’t really make shipping any easier, because they also sell continental brands in 250g and 500g packs, which they’ll have to deal with anyway. Oh, and all the prices have the price per kilo beside them on the shelf, so that’s probably not it. Heh.